My granddad once said to me when I was younger, “When faced with a challenge, don’t ask, “Why me?” instead ask, “Why not me? What can I do better?”

Hot blooded and young as I was, I still chose to whine as it was easier to focus on what’s not okay and play it huge in the mind! I still recall my granddad chiding me about it and yet I got away being his favourite…

As I grew up and I transcended into a life that worked and breathed impacting people everyday as a Life Coach, it started to dawn on me that what I indeed went completely ‘hyper’ about was actually something that I could learn from…After all, that’s what we did in all the coaching sessions, ‘Draw perspectives from situations as you look at life from an observer’s point of view!’

So, what I did was pick on a situation that I found myself irked about on a daily basis and decided to work on it! The traffic situation in Bangalore can be a living nightmare and that day I had to cross miles of concrete road before I headed into an important meeting that was technically an hour’s drive but would translate into a three hour painful journey. So instead of hyper-ventilating as I normally would have, I decided to pull out a paper and a pen that I carry with me always and jot down exactly what I was thinking and feeling! Here they are and what they meant and felt…

Ahaaaa, there it all was staring back at me like it was telling me something…The message was loud and clear; I was just reacting in the past due to the above thoughts and feelings. The ‘Why me?’ syndrome kept repeating itself on the assumption that I might be late.

The ‘Why not me? What can I do better?’ space brought these thoughts to the fore…

What if I saw this challenge a little differently and maybe it would actually help?

I felt better and in fact, reached the meeting 10 minutes late, apologized not from the space of fear or guilt but from a space of a knowing understanding that ‘I am human and I am not perfect!’

The person smiled and said, ‘Bangalore traffic and only 10 mins late? There are others who might come in later!”

Phew, having narrated this, it’s not to say that we can make up excuses for any situation but simply to think differently to have useful responses to a unfavorable situation….

It felt like leaves shedding in autumn only to come up with fresh new leaves in the next season! My granddad must be happy now 🙂

The above blog is by Anu Krishna originally published on her LinkedIn page. 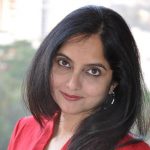 About the author: Anu Krishna is a Happyness Coach. When her passion for words merged with her purpose to make a difference to people’s lives, it fueled her to guide them to create a life that they want, so they tap into their unlimited potential and are truly ‘happy’ from within!